"Anders Nilsen is the author and artist of several graphic novels and comics including Big Questions, The End and Monologues for the Coming Plague and the Ignatz Award winning Don’t Go Where I Can’t Follow and Dogs and Water. His work has been featured in Kramer’s Ergot, Mome, Best American Non-Required Reading, Best American Comics, and the Yale Anthology of Graphic Fiction, as well as in a variety of magazines and on a number of book covers. His artwork has been exhibited internationally and translated into several languages. Nilsen grew up in both rural northern New Hampshire and Minneapolis, Minnesota. He studied painting and installation at the University of New Mexico in Albuquerque, earning a BFA in 1996 and did a year of graduate work at the School of the Art Institute of Chicago before dropping out to do comics on his own. He currently lives with his wife and their cat in Chicago."
BACK TO ANDERS NILSEN 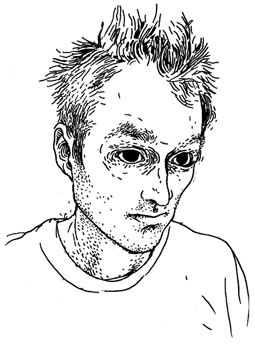